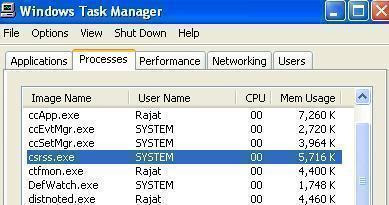 Csrss.exe is not harmful, but like any process, malicious software can corrupt or mimic it in order to hide from anti-virus software. If the user suspects that Csrss.exe is a corrupted or malicious file, he/she should run an anti-virus software such as Spyware Terminator, Advanced SystemCare, or Malwarebytes’ Antimalware. The user should also run a registry cleaner, such as CCleaner, in order to check the Windows Registry for errors and fix them. The user should not, however, attempt to remove the file.

How to Remove Csrss.exe

Csrss.exe is a critical Windows process and neither Windows Task Manager nor the popular third party software known as TaskKill can remove it. When the user attempts to remove it, he/she will receive this error message: “This is a critical system process. Task Manager cannot end this process.” However, Csrss.exe can be stopped from running in the Windows Vista Task Manager if it is running in Administrator mode, but doing so causes the Windows Operating System to stop running properly. If the user is experiencing problems with Csrss.exe, such as too much CPU usage, he/she should use the Windows Installation disc to repair the operating system, rather than remove Csrss.exe.

Onboarding experience of VMware ON AWS in Production Environment-Part2

VMware ON AWS Deployment - Requirements.  As mentioned in the previous post , when we are set with the project objective, we need to prepare the items mentioned in the VMC deployment checklist. Some of the basic requirements are,  The AWS account details - When we deploy our SDDC on VMware Cloud on AWS, it is created within an AWS account and a VPC dedicated to your organisation and managed by VMware. We must also connect the SDDC to an AWS account belonging to us, called the customer AWS account . This connection allows our SDDC to access AWS services belonging to our org  account. SDDC Management subnets - This is the most critical part of the deployment. Choosing the right network for SDDC and connect back to ON-Premise network (check with network team to make sure you provide unique range of CIDR, ASN etc to avoid conflicts)  Connectivity to On-Premise DC and VMC - There are different ways to connect to the On-Prem DC, using IPsec VPN, AWS Direct Connect, Hybrid Cloud Extension
Read more

Onboarding experience of VMware ON AWS in Production Environment - Part1

I hope you and your loved ones are safe and healthy   During this pandemic time, I have got a chance to onboard the VMware ON AWS to another location of our business. In this blog series I will share my experience and few tips about VMware ON AWS (VMC). This is purely my view and the intention are to spread the views to the community. If you have any issues, comments, feedback kindly share via email. Let’s get straight to the topic.  Why VMC:  Before we go choose to proceed with VMC, we need to understand and convince ourselves on below items,  Where do we fit this VMC in our existing infrastructure?  How could VMC bring in a value to our business  What workloads or solutions do we plan to run in this VMC?  Do we have a DR requirement? If yes, do we have an existing setup to migrate to VMC or its going to be a new DR setup?  Like this you might have to ask few questions which you might need to address it. When we have a problem statement and the solution, we are ready to proceed.  What
Read more

VMware introduced a new API service in vSphere 6.5 version which is known as vSphere Automation API. This service allows us to introduce several new SDKs for JAVA, Perl, Ruby, REST etc.   Today we will see how to setup the basic wizard to start using the API service in day to day life. For more information about what was introduced with the vSphere Automation APIs visit Here Documentation : The documentation for this SDK version is pretty straight forward. We can browse to each level of API and see the sections of what the operations it performs. We can get the URL, JSON , XML representation for each and every operations in the document. SDK Documentation   SDK tool kit: You can download the SDK kit from VMware { code } Tools required: We will use Postman today so that we will be able to start working with the API quickly and build your knowledge of how it works before using API in your own application. Postman is a great application to design, bu
Read more