vRA 7.5 Installation steps - Back to Basics

You can install vRealize Automation to support minimal, proof of concept environments, or in different sizes of distributed, enterprise configurations that are capable of handling production workloads. Installation can be interactive or silent.

After installation, you start using vRealize Automation by customizing your setup and configuring tenants, which provides users with access to self-service provisioning and life-cycle management of cloud services

New in this vRealize Automation Installation:

If you installed earlier versions of vRealize Automation, be aware of changes in the installation process for this release.

The Management Agent registers IaaS Windows servers with the vRealize Automation appliance,
automates the installation and management of IaaS components, and collects support and telemetry
information.

In this blog post we are going to see the basics steps of vRA 7.5 setup/installation

To create the appliance, you use the vSphere Client to download and deploy a partially configured virtual machine from a template. You might need to perform the procedure more than once, if you expect to create an enterprise deployment for high availability and failover. Such a deployment typically has multiple vRealize Automation appliances behind a load balancer.

Prerequisites
Log in to the vSphere Client with an account that has permission to deploy OVF templates to the inventory.

Download the vRealize Automation appliance .ovf or .ova file to a location accessible to the vSphere Client. 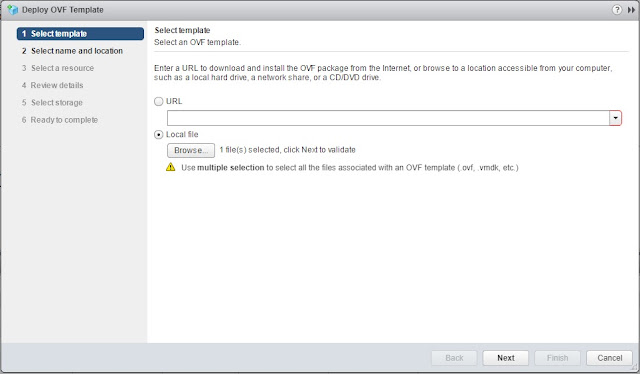 Enter an appliance name and inventory location.
When you deploy appliances, use a different name for each one, and do not include non-alphanumeric characters such as underscores ( _ ) in names. 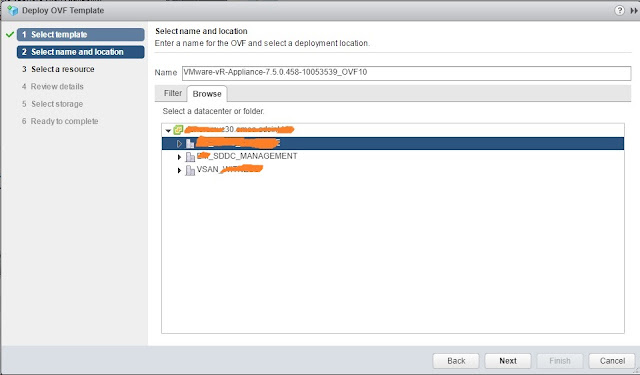 Select the host and cluster in which the appliance will reside. 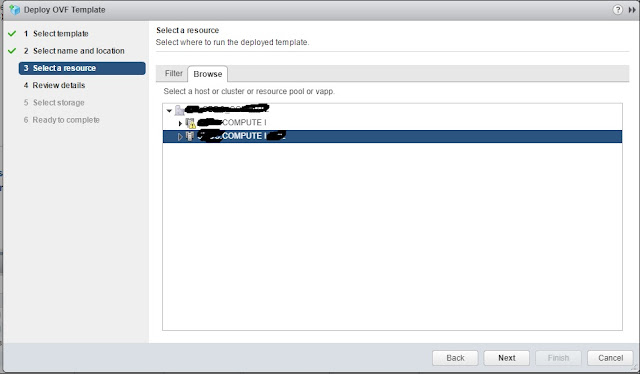 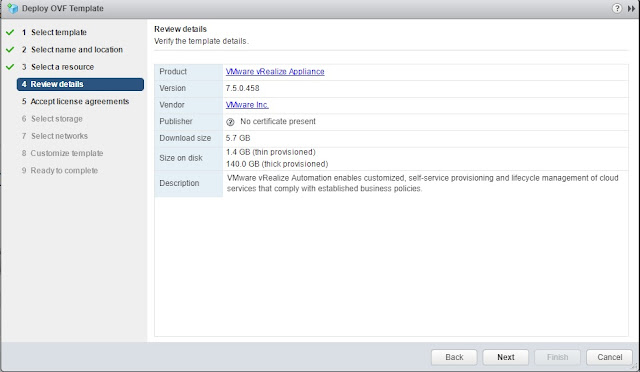 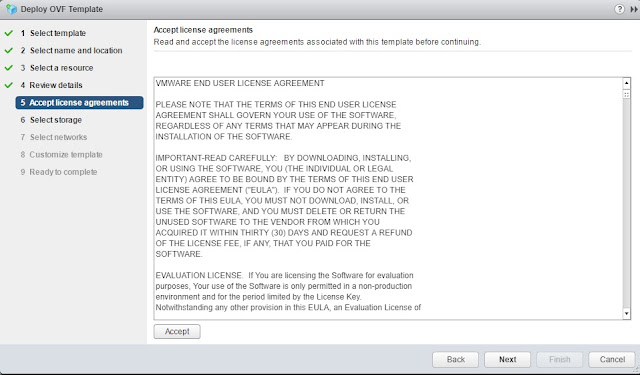 Select the storage that will host the appliance.
Select a disk format.
Thick formats improve performance, and thin formats save storage space.

Format does not affect appliance disk size. If an appliance needs more space for data, add disk by using vSphere after deploying. 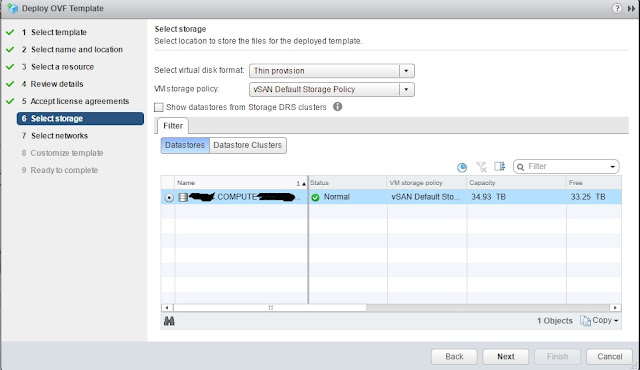 From the drop-down menu, select a Destination Network. 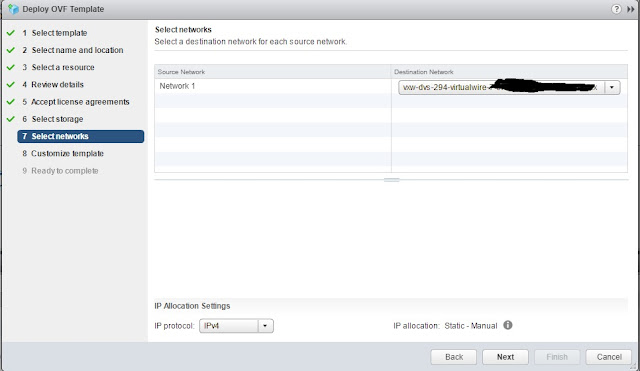 Complete the appliance properties.
Enter and confirm a root password.
The root account credentials log you in to the browser-based administration interface hosted by the appliance, or the appliance operating system command-line console.

Select whether or not to allow remote SSH connections to the command-line console.
Disabling SSH is more secure but requires that you access the console directly in vSphere instead of through a separate terminal client.

For Hostname, enter the appliance FQDN.
For best results, enter the FQDN even if using DHCP.

In Network Properties, when using static IP addresses, enter the values for gateway, netmask, and DNS servers. You must also enter the IP address, FQDN, and domain for the appliance itself, as shown in the following example. 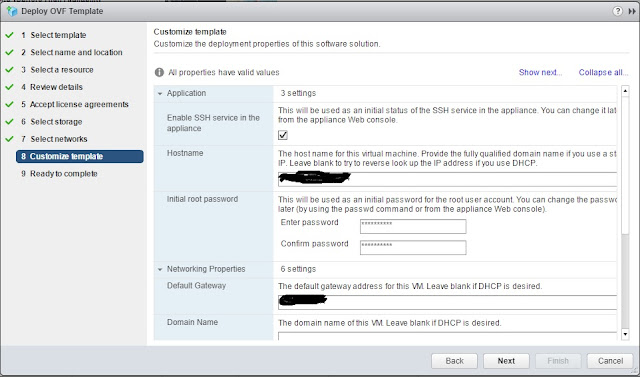 Review the settings and submit the request 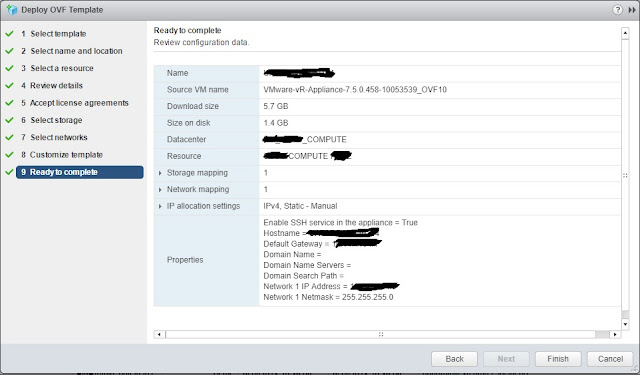 When you submit the request the deployment work flow starts. This workflow firstly deploys the appliance and once the deployment finishes the VM will be powered ON. You can watch the installation/initialisation steps in the console. 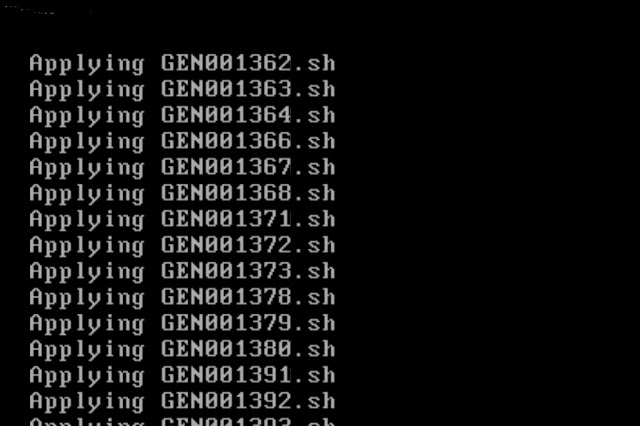 The initial setup would take few minutes and VM lands in initial/welcome screen. 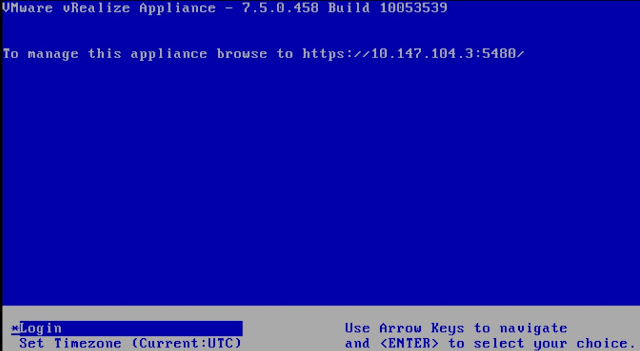 Start the wizard by logging in as root to the vRealize Automation appliance administration interface.

As you login, the vRealize automation appliance configuration wizard starts, 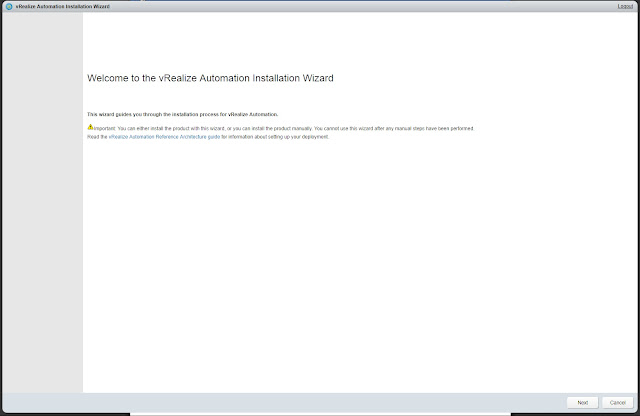 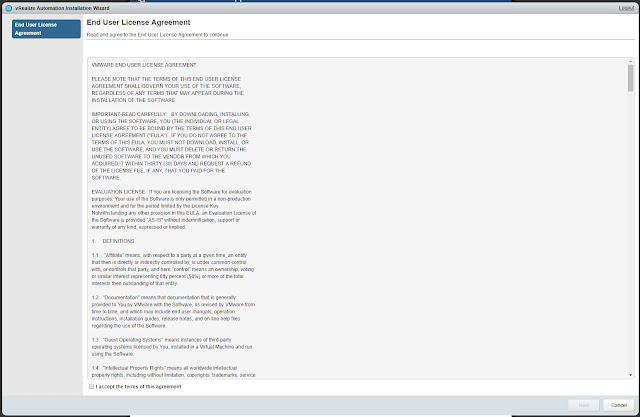 On the Deployment Type page, you decide which vRealize Automation components, and how many of each, you want to install.

When you select an enterprise deployment, additional Installation Wizard pages appear in the summary list at the left of the wizard.

When you select IaaS, additional Installation Wizard pages appear in the summary list at the left of the wizard. 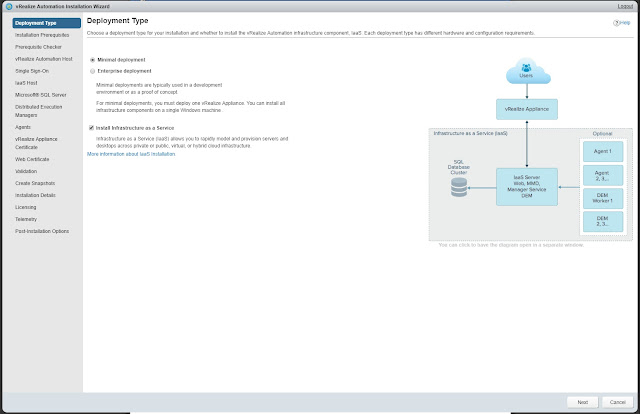 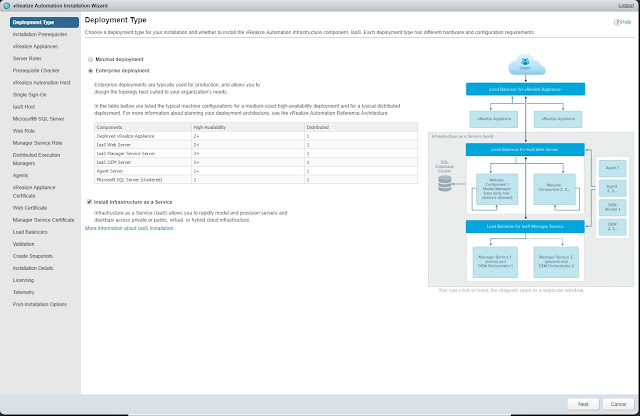 To have the Installation Wizard ignore a discovered host, click Delete. Deleting a Windows host does not remove its Management Agent. To uninstall the agent, use the Add or Remove Programs feature directly in Windows. 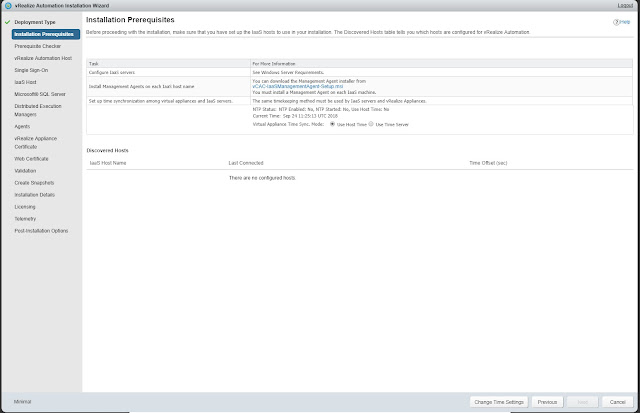 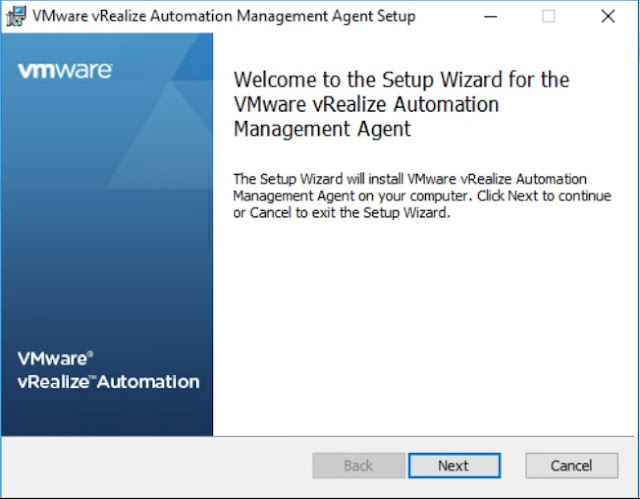 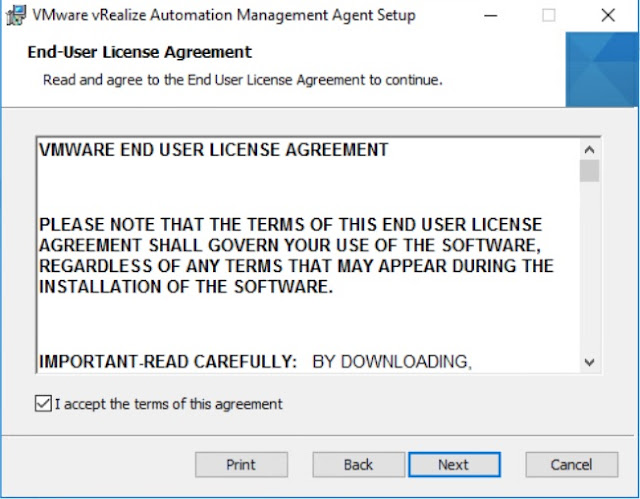 Location to install the agents 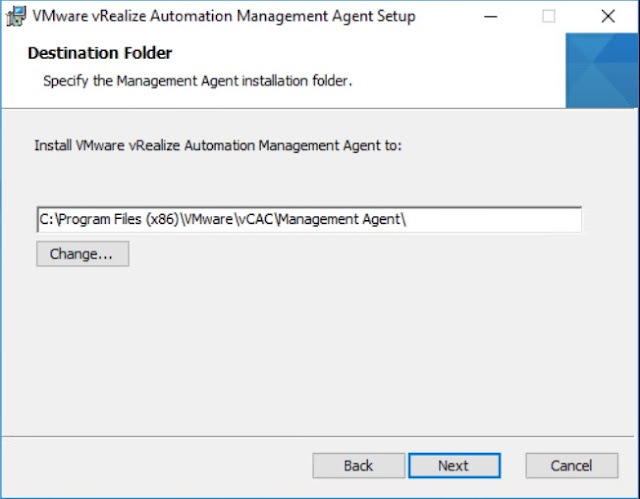 Suffice the details of the vRA appliance , credentials to login to the vRA and also the certificate ( if you use custom certs then the host names should match the windows instance) 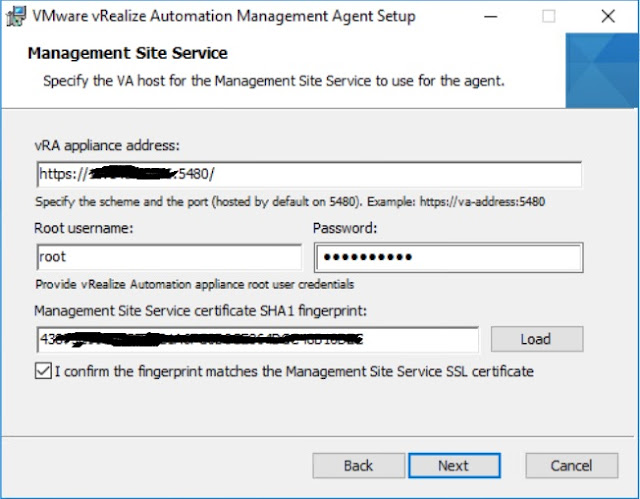 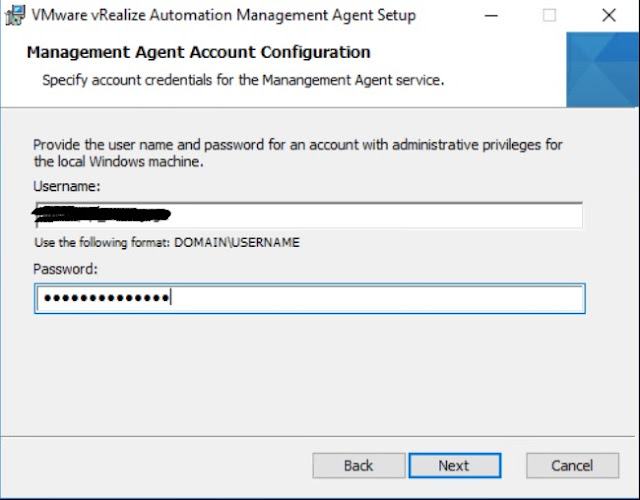 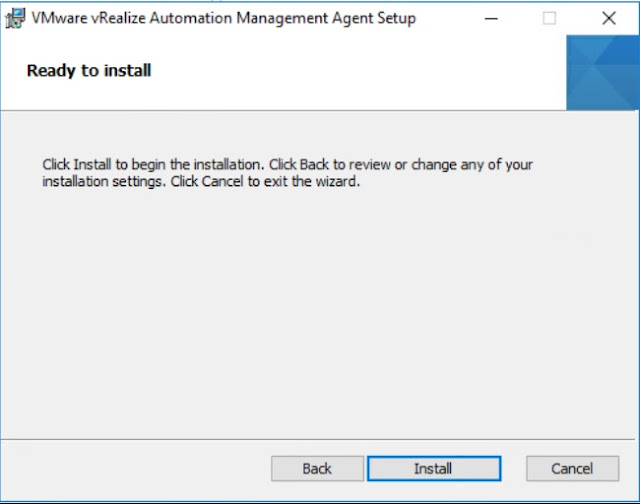 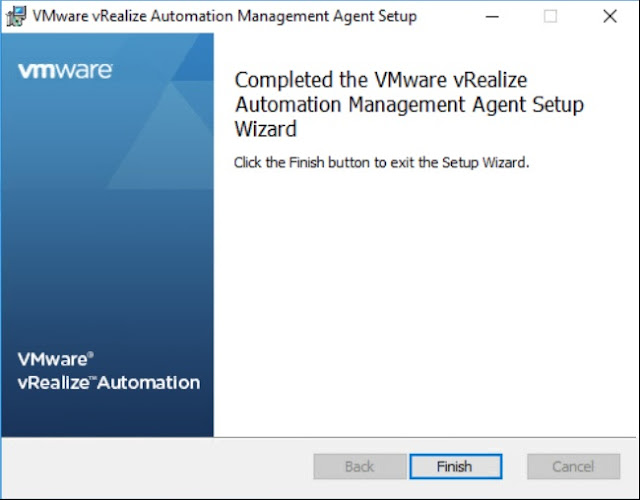 Once the installation finishes, switch back to the vRA 7.5 configuration wizard and look for the agent status. 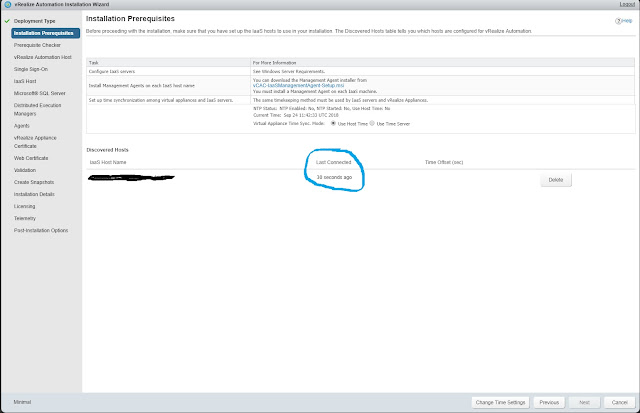 As above you would be able to see the last sync details of the agent with the vRealize automation appliance.

Proceed with the configuration of Iaas and the DB. Further steps are pretty much easier as like the previous versions and I would cover the screen shots in the next thread.

DNS Scavenging is a great answer to a problem that has been nagging everyone since RFC 2136 came out way back in 1997.  Despite many clever methods of ensuring that clients and DHCP servers that perform dynamic updates clean up after themselves sometimes DNS can get messy.  Remember that old test server that you built two years ago that caught fire before it could be used?  Probably not.  DNS still remembers it though.  There are two big issues with DNS scavenging that seem to come up a lot: "I'm hitting this 'scavenge now' button like a snare drum and nothing is happening.  Why?" or "I woke up this morning, my DNS zones are nearly empty and Active Directory is sitting in a corner rocking back and forth crying.  What happened?" This post should help us figure out when the first issue will happen and completely avoid the second.  We'll go through how scavenging is setup then I'll give you my best practices.  Scavenging s
Read more

HOW TO EDIT THE BCD REGISTRY FILE

The BCD registry file controls which operating system installation starts and how long the boot manager waits before starting Windows. Basically, it’s like the Boot.ini file in earlier versions of Windows. If you need to edit it, the easiest way is to use the Startup And Recovery tool from within Vista. Just follow these steps: 1. Click Start. Right-click Computer, and then click Properties. 2. Click Advanced System Settings. 3. On the Advanced tab, under Startup and Recovery, click Settings. 4. Click the Default Operating System list, and edit other startup settings. Then, click OK. Same as Windows XP, right? But you’re probably not here because you couldn’t find that dialog box. You’re probably here because Windows Vista won’t start. In that case, you shouldn’t even worry about editing the BCD. Just run Startup Repair, and let the tool do what it’s supposed to. If you’re an advanced user, like an IT guy, you might want to edit the BCD file yourself. You can do this
Read more