In our previous posts, we saw the option to deploy the VCH using CLI utility, vSphere client etc. In this post, we see an option to automate the VCH deployment using vRealize Automation ( vRA)

The current automated world requires the seamless and fastest deployment of its infrastructure. VMware vSphere Integrated Containers gives developers an essential tool for streamlining the process of building and running containerized applications in production.  The deployment of VCH is done through various methods as we see in our previous posts. But in this post, we are going to see how to automate the VCH deployment and the first VCH in few mouse clicks. By using the service catalog in vRealize Automation to provision Virtual Container Hosts on-demand as a ticketless offer, you can make your developers self-sufficient.

The vRealize Automation 7.4 and later versions support provisioning and management of Virtual Container Hosts(VCH) for running vSphere Integrated Containers (VIC).  Here below are the step-by-step procedure on how to use the XaaS blueprint in vRealize Automation to create a fast, self-service offering of Virtual Container Hosts while ensuring compliance with business policies.

Step 3: Login to the Orchestrator and you land in the page 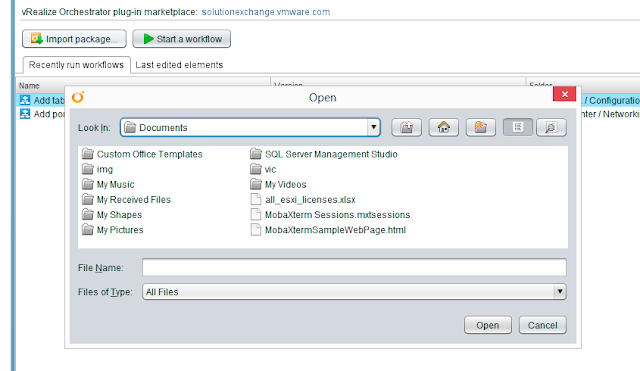 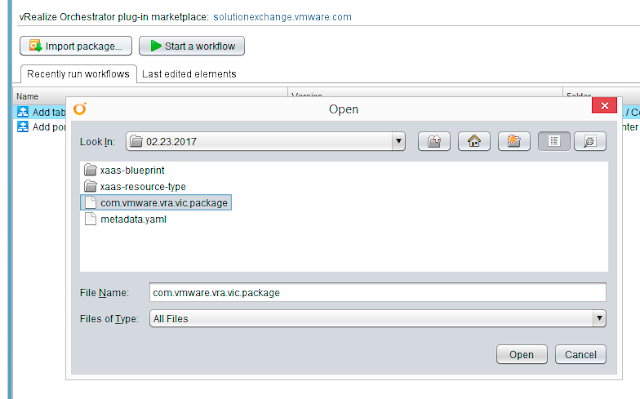 Step 5:  You get the signature verification window. Choose one "Import once or Import and trust provider" and proceed 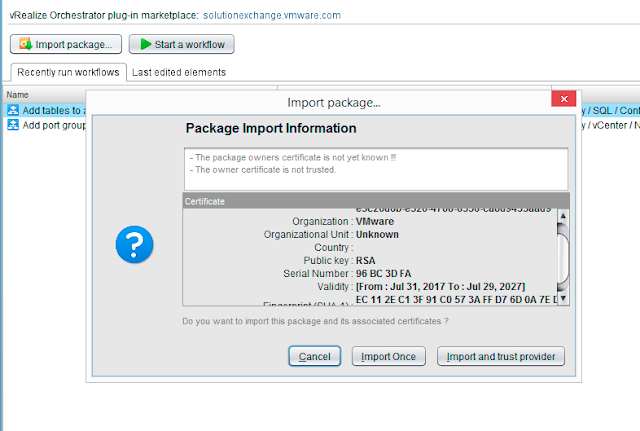 Step 6: In this step, you get the configuration summary and the items which are imported as part of the package 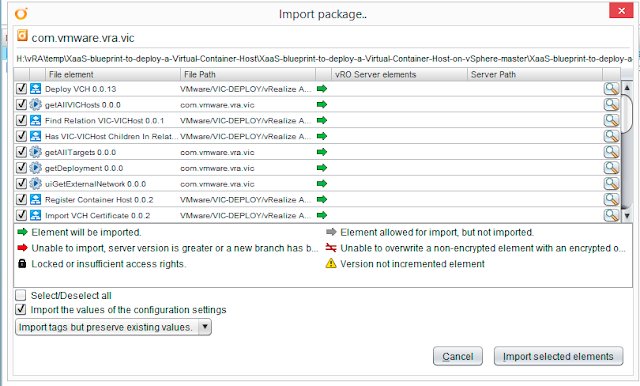 Step 7: Click Import selected elements and you should see the progress bar 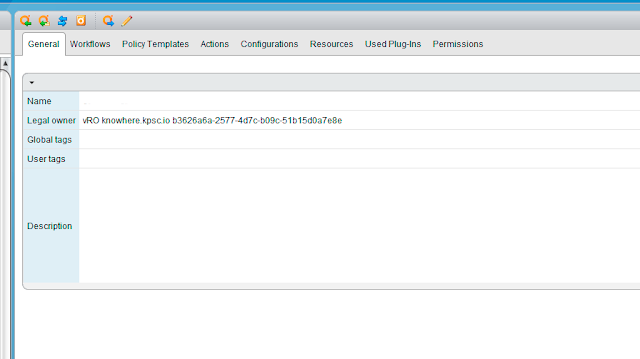 Step 8:  Once imported successfully, we should see the package and its workflows in the inventory. Go to the workflows tab and verify that you see the workflows as below. 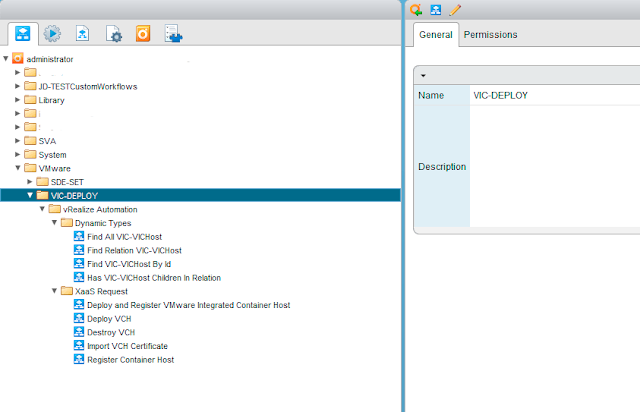 Step 9: Go to the Configurations tab and select the configuration element found under the path –  VMware->VIC Deploy->vRealize Automation->Targets

Edit the element as per your environment settings. You can change the name of the element too matching the syntax. (Syntax Reference)

Step 10:  Make sure to keep the same name for another configuration element which is found under the path – VMware->VIC Deploy->vRealize Automation->Deployments

a. Download the VIC bundle by accessing the admiral portal 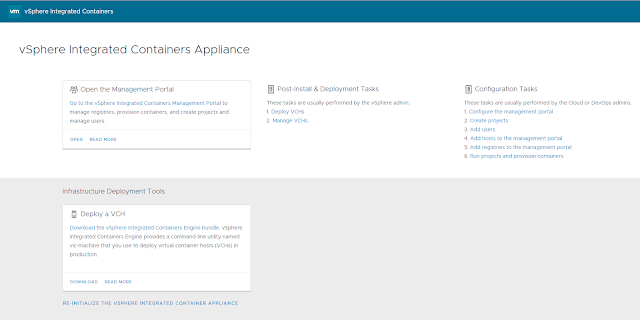 b. Log in to vRealize Orchestrator appliance or vRA appliance ( if it's embedded) and copy the VIC v1.5.4.tar file to the location /etc/vco/app-server/

f. Edit the /etc/vco/app-server/properties and add the following property to the bottom of the file:  com.vmware.js.allow-local-process=true
g.  Close the editor and restart the vco service using the following command: /etc/init.d/vco-server restart (Note: If you have a high available implementation of vRealize Automation, steps b - f must be performed on every vRealize Automation appliance node).


Step 11: Create a catalog item. In order to create it, we need to import the blueprint using the tool called "CloudClient". Run below command in cloudclient.


Once we import the blueprint, we should see them under the design, select the imported XaaS blueprint, we can edit the details as required 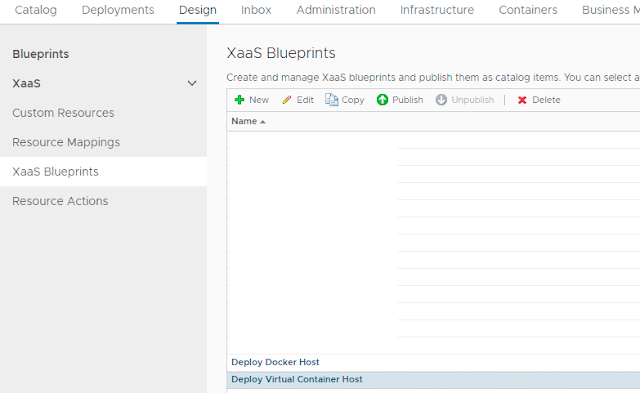 Choose the option to be presented to users. Go to the Blueprint Form tab and select the field named – Select vSphere / ESXi Host.  Make sure that the ‘Default Value’ matches the name of the configuration element specified in step 9. 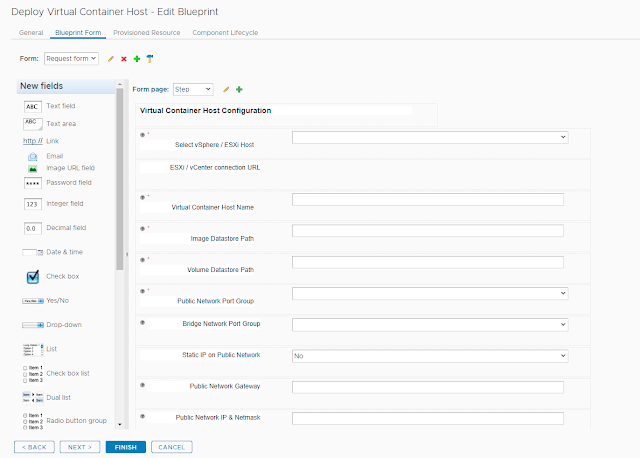 Step 13: Go to the vRA Catalog tab and you should see ‘Deploy Virtual Container Host’ as a catalog item.

Step 14: Users can request the vms, check the status of your request in the Requests tab. Once the request is completed, the VCH will be visible in the vCenter. 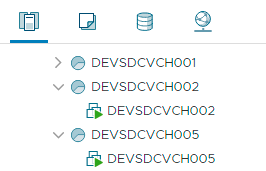 Once the VCH is deployed, the URL of the VCH can be made available to the developers who can start deploying vSphere Integrated Container using the Docker Client OR from vRA using the vRA-Containers provisioning feature. ( refer post for adding VCH to projects/vRA containers tab)

How to increase the log retention in Orchestrator Server ( server.log)

When you are debugging the Orchestrator related issues in mid/large deployments , it is expected that the server.log file rotates rapidly.  In this case we need to increase the log file size and the rotation interval. Below are the steps to make changes to the config file to capture large number of files for troubleshooting.  Config File Location :  Appliance deployment:  /etc/vco/app-server/log4j.xml Windows deployment:  <install_Location>\app-server\conf\log4j.xml Steps:  1. Edit the file  log4j.xml 2. Locate the  <appender class="org.apache.log4j.RollingFileAppender" name="FILE">  section 3. Increase the size of the log file to 10 MB   <param name="MaxFileSize" value="10240KB"/>    4. Increase the  number files to be retained before rotation  <param name="MaxBackupIndex" value="5"/> Cheers :-)
Read more

DNS Scavenging is a great answer to a problem that has been nagging everyone since RFC 2136 came out way back in 1997.  Despite many clever methods of ensuring that clients and DHCP servers that perform dynamic updates clean up after themselves sometimes DNS can get messy.  Remember that old test server that you built two years ago that caught fire before it could be used?  Probably not.  DNS still remembers it though.  There are two big issues with DNS scavenging that seem to come up a lot: "I'm hitting this 'scavenge now' button like a snare drum and nothing is happening.  Why?" or "I woke up this morning, my DNS zones are nearly empty and Active Directory is sitting in a corner rocking back and forth crying.  What happened?" This post should help us figure out when the first issue will happen and completely avoid the second.  We'll go through how scavenging is setup then I'll give you my best practices.  Scavenging s
Read more