The previous post talks about vSphere Integrated Containers and their benefits. The VIC offers a robust solution that enables the vSphere environment to quickly get containers up and running in their current vSphere infrastructure. This environment can be useful for migrating current apps to containers or for in-house development.

In a traditional container environment, containers run as threads within the container host. vSphere Integrated Containers leverage the native constructs of vSphere for provisioning container-based applications into its own container running its own very minimal Linux kernel with just enough code to run a Docker image, thus preventing any issue with containers being accessed from other containers by pushing isolation of the container down to the hypervisor layer that is much better at handling this type of isolation.

This isolation permits IT directors to deliver an instrumentation atmosphere while not having to create a separate, specialized instrumentation infrastructure stack. By deploying every instrumentation image as a vSphere virtual machine (VM), vSphere Integrated Containers permits these workloads to leverage vital vSphere application availableness and performance options like vSphere hour angle, vMotion, DRS and a lot of. vSphere Integrated Containers provides these options whereas still presenting a jack API to developers of container-based applications.

The VIC engine is that the mechanism that gives this docker API to the container VM’s. It permits the provisioning and management of VMs into vSphere clusters using the docker binary image format. It allows vSphere admins to pre-allocate certain amounts of compute, networking and storage and provides that to developers as a self-service portal using a familiar Docker-compatible API. It permits developers that already know docker to develop in containers and deploy them aboard ancient VM-based workloads on vSphere clusters.

In VIC, we can deploy virtual container hosts (VCHs) that serve as Docker API endpoints. VCHs allow Docker developers to provision containers as VMs in your vSphere environment.

If you have installed the HTML5 plug-in for vSphere Integrated Containers, you can deploy virtual container hosts (VCHs) interactively in the vSphere Client. 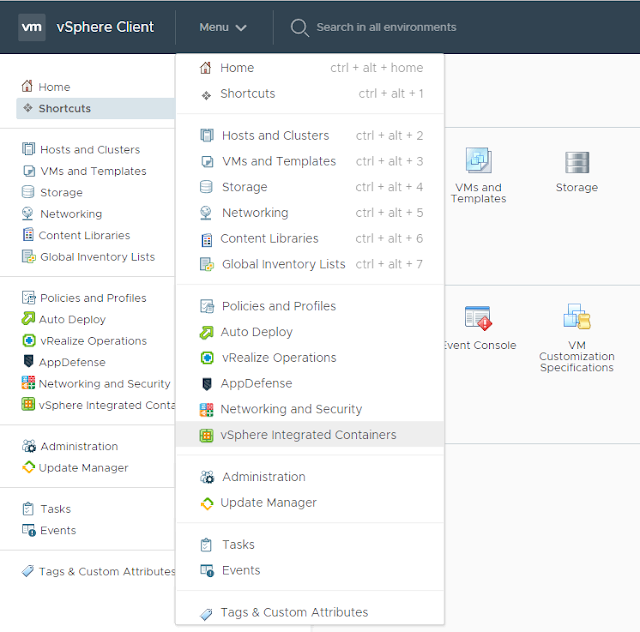 The vSphere Integrated Containers view presents the number of VCHs and container VMs that you have deployed to this vCenter Server instance. 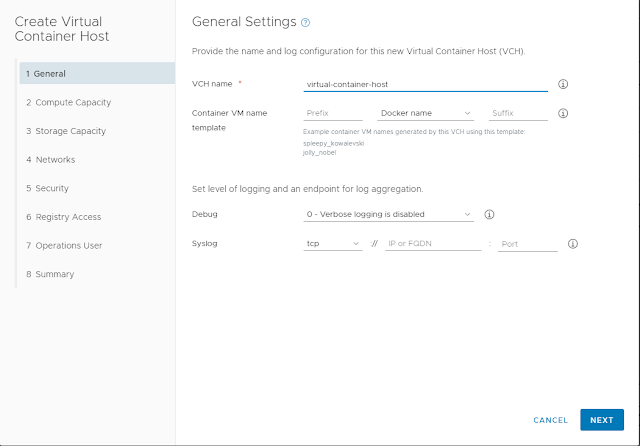 Choose a cluster where you want to deploy a VCH 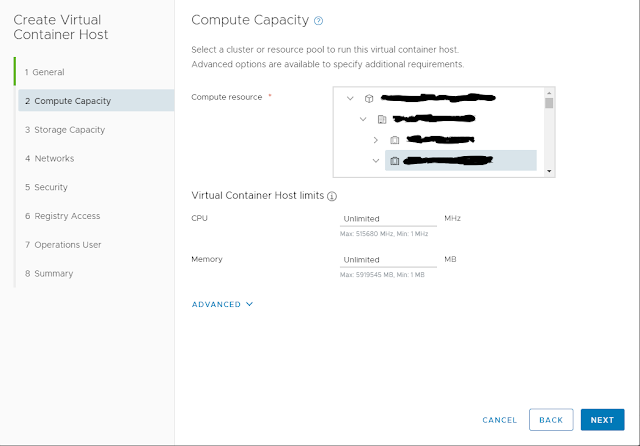 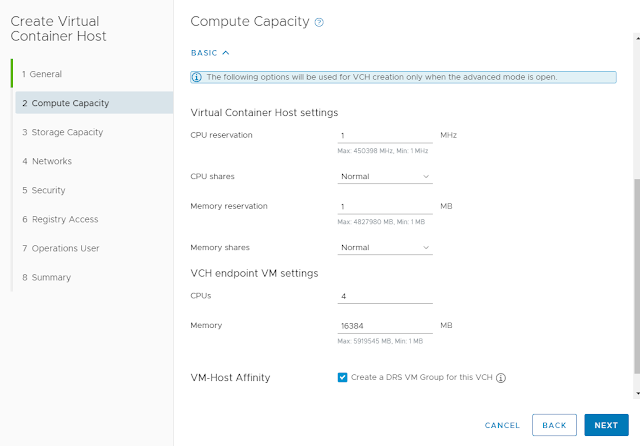 Provide storage/datastore information. I recommend enabling anonymous volumes, which creates a path by default. If not then you could need to create/attach a volume manually post the deployment 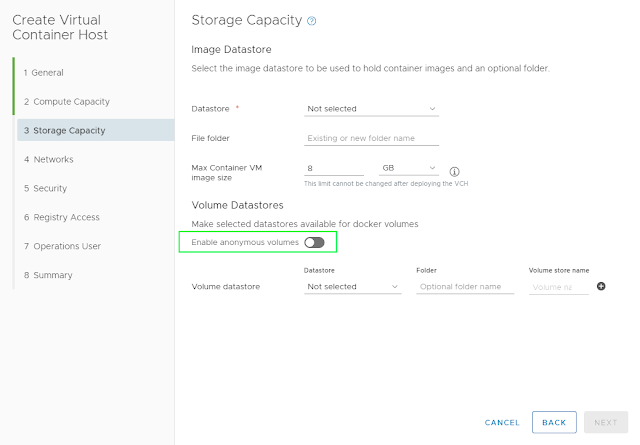 Configure Networks - It is mandated to provide the Bridge network and Public network.

NOTE: It is mandated to create a dedicated BRIDGE NETWORK PORT GROUP for EACH VCH. If you reuse the same PORT GROUP then you would end up with duplicate IPs on C-VMS/container VMS 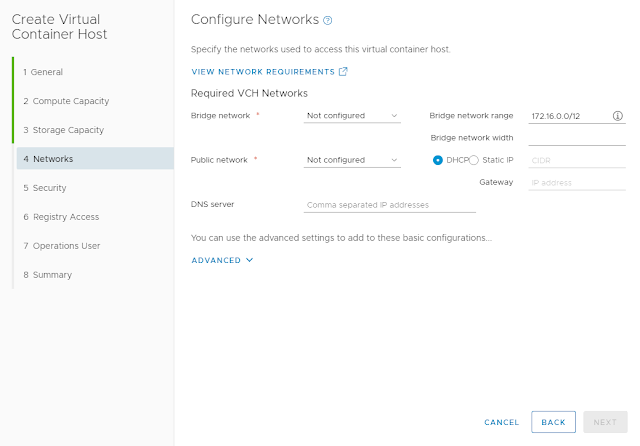 Security options - you can also turn off this option in your closed/POC/test setup. 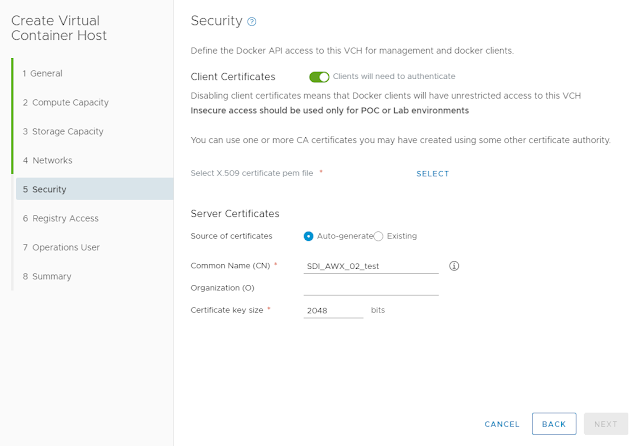 Registry access:  Leave it to default values unless you have some restrictions applied to download the registry entities in your network 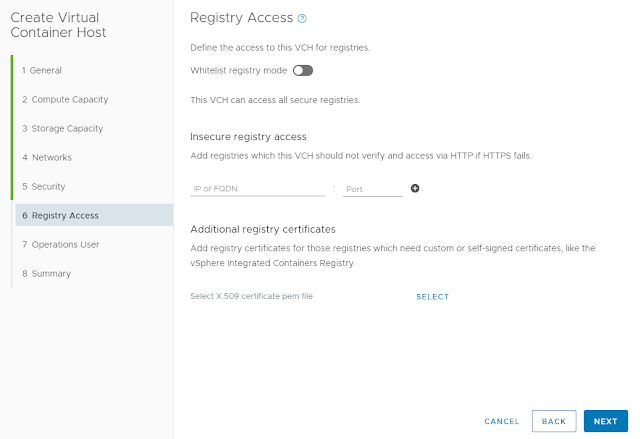 In the next step, review and submit the request. Once the deployment is successful, you should see the below details with the right IP address.

In the vSphere client, we should be able to see a resource group/pool created with the same name as a VCH

NOTE: Each VCH creates its own Resource POOL where all the C-VMs/ container vms are grouped. 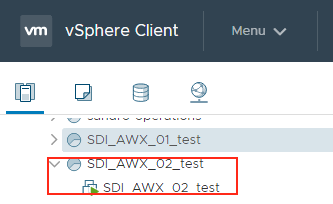 Once you have the DOCKER API IP details, navigate to VIC administrator portal and add the VCH to the project 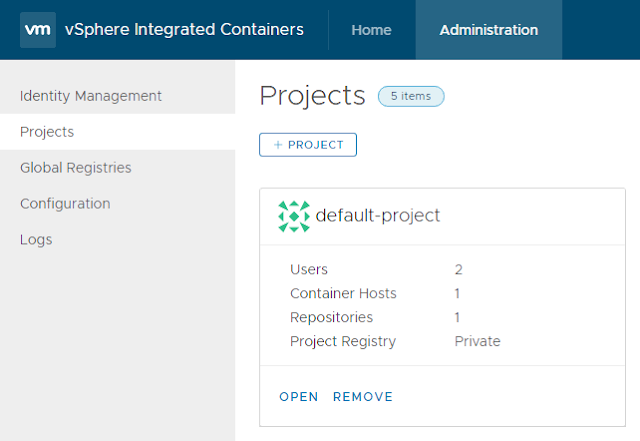 Name a PROJECT where you want to add the VCH to.

Add host to the PROJECT 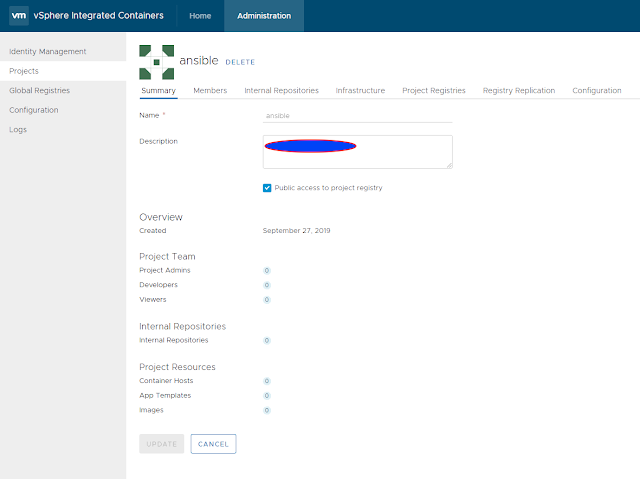 Add members who are entitled to access the project 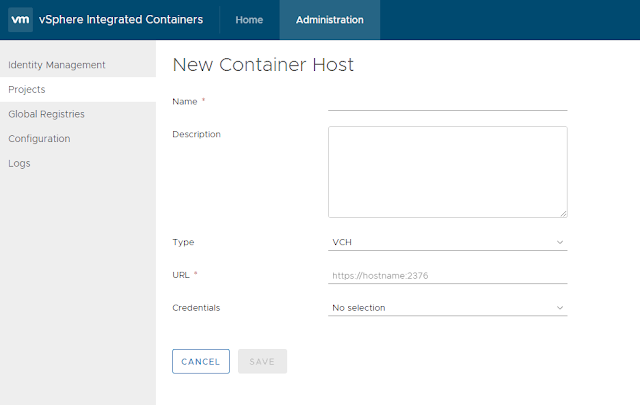 Once the host is added it lists under the Infrastructure tab. We can add multiple hosts in this project 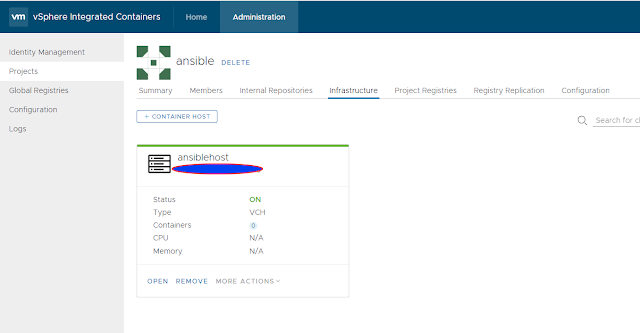 Hosts are added to the Project and we are ready to spin our first C-VM/container. 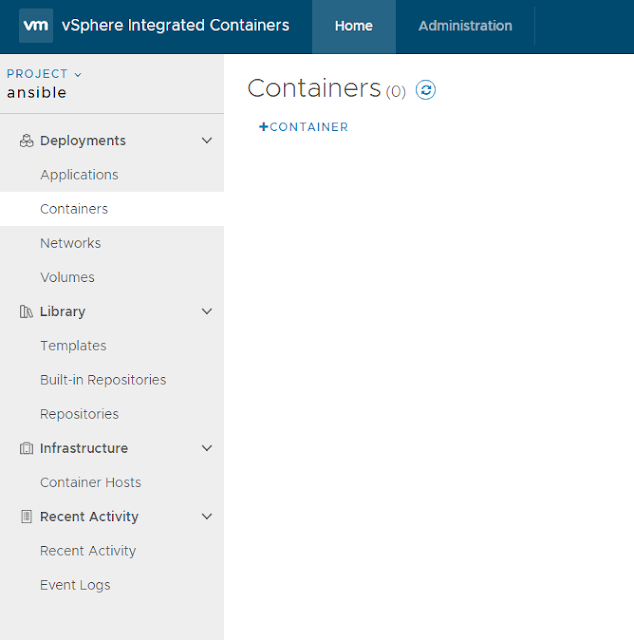 In our next post, we see other options to deploy the VCH.

Onboarding experience of VMware ON AWS in Production Environment-Part2

VMware ON AWS Deployment - Requirements.  As mentioned in the previous post , when we are set with the project objective, we need to prepare the items mentioned in the VMC deployment checklist. Some of the basic requirements are,  The AWS account details - When we deploy our SDDC on VMware Cloud on AWS, it is created within an AWS account and a VPC dedicated to your organisation and managed by VMware. We must also connect the SDDC to an AWS account belonging to us, called the customer AWS account . This connection allows our SDDC to access AWS services belonging to our org  account. SDDC Management subnets - This is the most critical part of the deployment. Choosing the right network for SDDC and connect back to ON-Premise network (check with network team to make sure you provide unique range of CIDR, ASN etc to avoid conflicts)  Connectivity to On-Premise DC and VMC - There are different ways to connect to the On-Prem DC, using IPsec VPN, AWS Direct Connect, Hybrid Cloud Extension
Read more

Onboarding experience of VMware ON AWS in Production Environment - Part1

I hope you and your loved ones are safe and healthy   During this pandemic time, I have got a chance to onboard the VMware ON AWS to another location of our business. In this blog series I will share my experience and few tips about VMware ON AWS (VMC). This is purely my view and the intention are to spread the views to the community. If you have any issues, comments, feedback kindly share via email. Let’s get straight to the topic.  Why VMC:  Before we go choose to proceed with VMC, we need to understand and convince ourselves on below items,  Where do we fit this VMC in our existing infrastructure?  How could VMC bring in a value to our business  What workloads or solutions do we plan to run in this VMC?  Do we have a DR requirement? If yes, do we have an existing setup to migrate to VMC or its going to be a new DR setup?  Like this you might have to ask few questions which you might need to address it. When we have a problem statement and the solution, we are ready to proceed.  What
Read more